Ben spent most of his adult life on and off drugs and in and out of jail. The last time he was arrested, he had been sober for several months but relapsed. “I was in a bad frame of mind,” he recalls. “I was sick of my life and I wanted a change.” That change came when Ben picked up a Bible in his cell block and began reading Hebrews 12. “When it mentioned that God disciplines the ones He loves, it really rang true for me. I’d always known about Jesus, but I’d never considered myself a Christian. That day, I gave myself to Christ.”

Fortunately, Ben had a friend in jail who encouraged him in his new-found faith. He also told Ben about Hope Gospel Mission and how it could help him achieve the life change he wanted so badly. When he was released nearly two years ago, Ben came to the Mission and joined the Renewed Hope program. “Taking that first step was scary,” he admits. “I was out of my comfort zone, but I knew it was something I needed. Everybody told me it would get easier, and it did.”

Before long, Ben flourished with others at the Mission. “In the life I had before, I was around selfish, unhealthy people — and I was the same. Now I was around people I could trust, who loved me and cared for me. It was something I’d never really experienced, and it was amazing. It still is!” 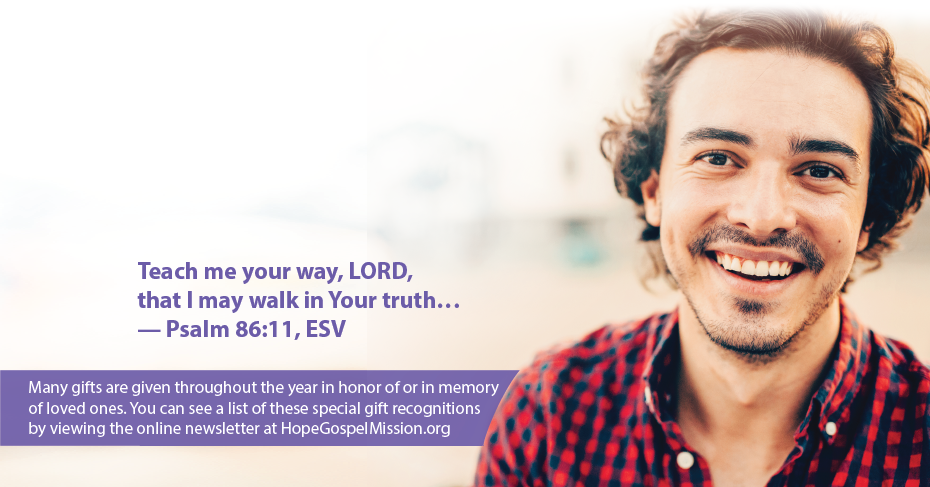 Today, Ben is ready to experience what it feels like to be “a stable, normal adult.” He works full-time and plans to enter our Discipleship Transitions program when he graduates — which is very soon! Best of all, though, Ben now enjoys a close, loving relationship with his family, including his seven year-old son.

“I’m forever grateful,” Ben says when asked about friends who donate to Hope Gospel Mission. “You might not see the direct impact of your gifts, butthey’re life changers. My family can attest to that.” Because you cared, he tells us, “There’s one happy little boy who’s glad to have his dad back in his life. And my mom’s happy to have her son back.”